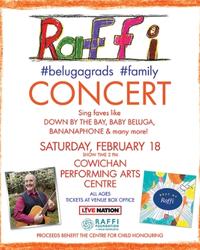 A renowned singer known by his first name alone, Raffi was a pioneer in quality recordings for children on his independent label, Troubadour. For millions of fans, Raffi’s music was the soundtrack of their childhoods, and they took his signature song “Baby Beluga” to heart. These “beluga grads” now share his music with their own children. Raffi has been described by the Washington Post and the Toronto Star as “the most popular children’s entertainer in the English-speaking world” and “Canada’s all-time children’s champion.”